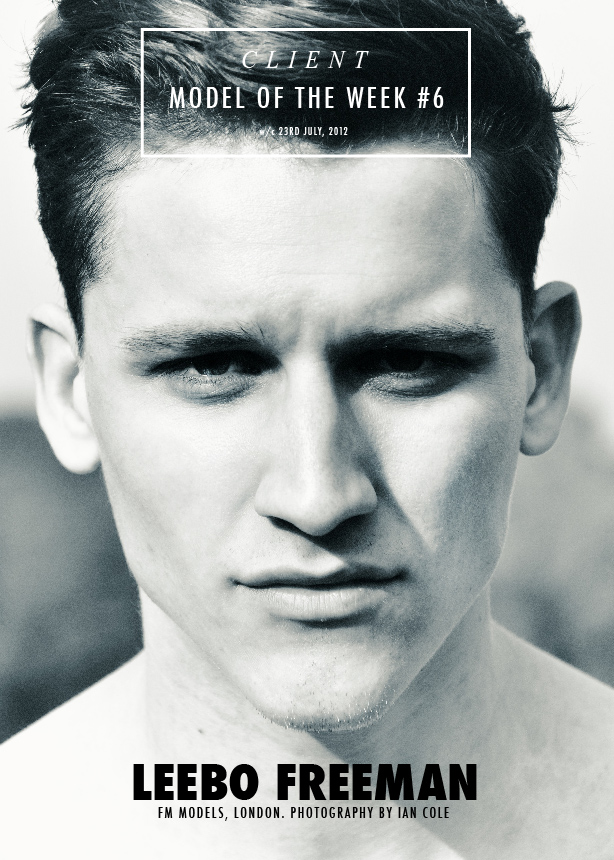 Leebo Freeman was born on 8th July, 1988 in Florida, USA. His distinctive look was first brought to light when he opened the Mugler AW/11 Show in January 2011. He also booked the Uniqlo UT SS/11 campaign that year. It would almost be pointless to list how many magazines he has featured in since then, it would be easier to list which magazines he HASN’T been in. For Client’s 100 Faces of 2011, Leebo came in at an incredible 17, not bad for a new face!

Leebo met with Client’s Editor, Ian Cole in London to have a chat and take some shots for our MOTW. As well as modelling, Leebo is also a keen musician (music being a huge passion), and we will learn more about his acting later. One thing was clear – Leebo is incredibly focussed on his career and passionate about what he does and the people he works with. We can see how and why his career had progressed so fast in the space of a year. As a bonus, Leebo is a really nice guy.

Signed to agencies across the globe, including ADAM NYC (Mother Agency), FM (London), I LOVE MGMT (Milan), VIEW MEN (Barcelona), NEST (Berlin), UNIQUE (Denmark), SUCCESS (Paris) and NEXT (Los Angeles), where he has booked editorials in the following, to name but a few:

He’s also booked shows with some of the following designers – Mugler, Vivienne Westwood, Patrik Ervell, Jeremy Scott, Frankie Morello and Dsquared2 amongst others.

Not only can you look forward to seeing Leebo in magazines and on billboards in the future, but you can now see him on the Big Screen. Last year Leebo played a supporting role in Mentryville – alongside Danny Glover, Taylor Handley, Vinnie Jones and other familiar faces. It’s great to see somebody with star quality get recognised!