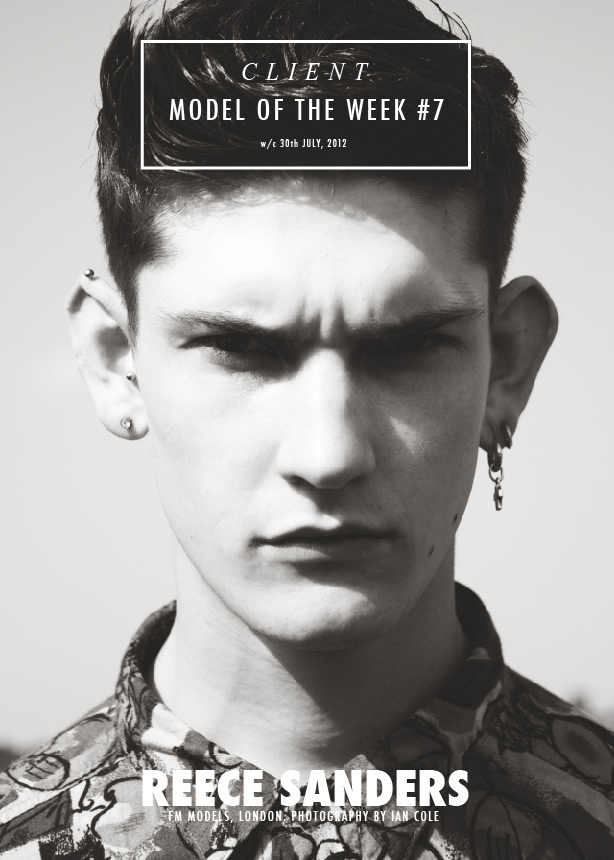 In the space of a year, Reece Sanders has propelled into one of the most successful new face show-boys. He already has the following shows under his belt:

This is no small feat. Kudos to his agencies for all the hard work and to Reece for not letting any of this go to his head – he is still a crazy lad from Nottingham and we look forward to featuring him in a print issue of Client soon. To clarify that Reece is a bit crazy, check out this Q&A below. Very crazy…

When and where were you born?
Nottingham!!!

Where you scouted or did you approach modelling yourself?
They found me in the streets………. story of my life

What would you say has been the highlight of your life so far (doesn’t have to relate to modelling)?
Since we have to keep this magazine friendly i’d sayy……. errrmmmm….. i once made a bowl of porridge soo good that i now can’t eat porridge knowing it will never live up to the previous bowl. So i would say the highlight is probably becoming a youth worker

What would your super hero power be?
iI can’t tell you because i wished for it on my 20th birthday… don’t want it to not come true now do i? Or have i already said to much????

Name three tracks on your iPod?
You won’t have heard of them. Some local Grime but check them out anywhoooooo

2) Window (from the deep rot) got some absolute smash hits of his on there!

3) The Afterdark Movements <<< Bru-c’s band.. check them you won’t regret it!

What is your absolute favourite food?
Maryland chicken!

What’s your party trick?
I can turn water in to wine

If you could choose anywhere in the world to do a shoot with any photographer, where and who would it be?

ALL OF THEM EVERYWHERE!!!! (bit of a brown nose never hurt)

Probably the roswell ufo incident….. or when one of my disciples grassed me up to the Romans

Do you have hobbies or are you too cool?
I like to sit staring in to the mirror and cry

What’s your motto?
Don’t worry it will all blow over

He won’t be winning any literary prizes but he does shoot well. Thank you Reece!