Australian boot-maker R.M. Williams was founded in 1932 in the Outback of Australia and they have collaborated with Paris-based custom garage, Blitz Motorcycles on an exclusive custom motorcycle and footwear collection. The collection went on sale at London’s infamous Harrods department store on 29th September 2017 along with the unveiling of a handcrafted bespoke scrambler.

“As the first instalment in our Craftsman Collaboration Series, this project taps into the spirit of the scrambler and the drovers that reverse engineered them to head off the beaten track, and back again,” said Mathew Hayward, Chief Marketing Officer at R.M.Williams. 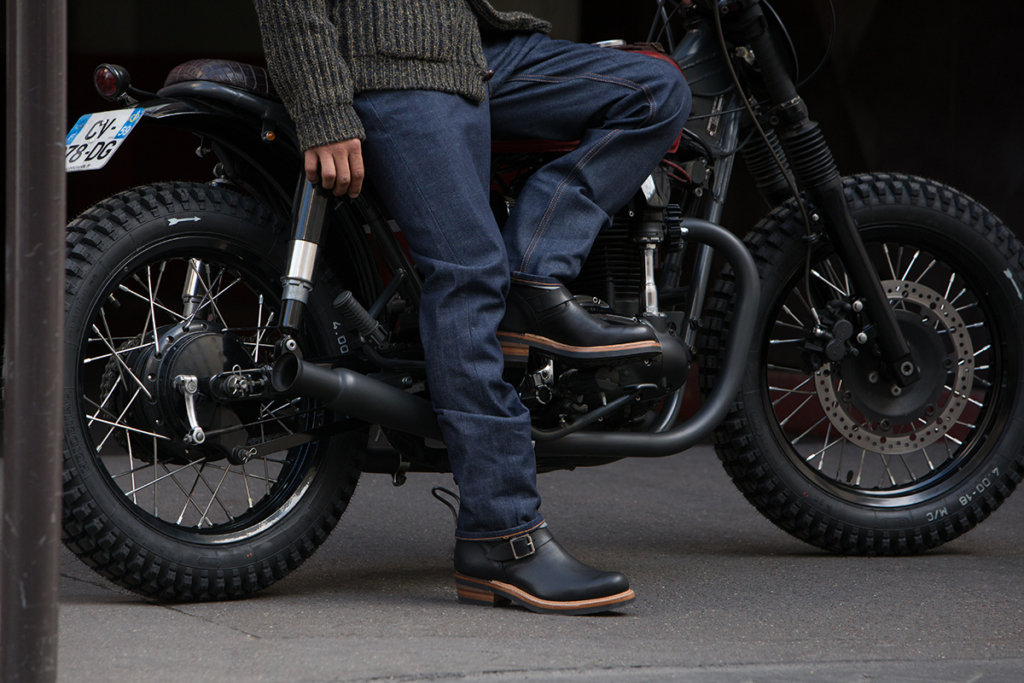 The collaboration fuses the renowned craftsmanship of the brands whilst referencing the Australian ‘drovers’ who utilise motorcycles to herd cattle over the vast landscapes of the Australian outback. The original drover motorcycles were parallel twin-engine bikes, so to convert into a scrambler model, which is more suited to the outback terrain, the Blitz experts have used similar customizations that were made by the drovers in the mid-Twentieth Century. The frame has been lowered with knobbly tyres added for improved handling on sand, desert and grassland terrain.

R.M. Williams dipped into their archives to recreate two versions of the brand’s original motorcycle boot, which was first created in 1993. The Scrambler boots are available in two leather options – chestnut crocodile, available only from the brand’s bespoke service and the 2nd is a black New Zealand cowhide, a leather which is exclusive to this collaboration. The tread rubber sole is subject to 85 hand-held processes and available to purchase both at Harrods on the Fifth Floor through the R.M.Williams Made-to-Order service and via the R.M.Williams website, www.RMWilliams.com. 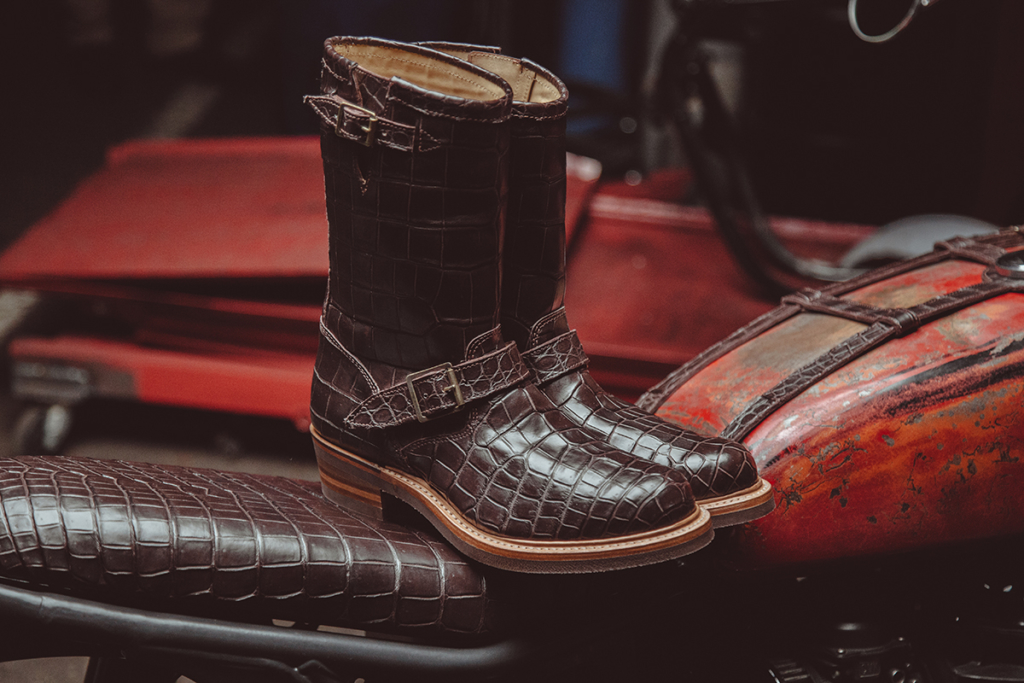 To tie in with the Scrambler boots, the Blitz motorbike features the same exotic chestnut crocodile for its saddle, handlebar grips and tank straps, which are handcrafted at the R.M.Williams workshop in Adelaide. The front plate carries the RMW initials and a race classification plate, featuring the number 32, the date R.M.Williams was founded. The bike is priced at £40,000 and comes with a pair of bespoke crocodile skin Scrambler boots handcrafted from the same pelt as that used for the bike’s saddle, grips and tank straps.

“For this project, it was so important for us to partner with craftsmen whose work with motorcycles provided
a sincere reflection of R.M.Williams’ dedication to handcrafted footwear,” said Jeremy Hershan, Head of Design at R.M.Williams. “With their uncompromising attention to detail, performance and finish, the guys at Blitz have meticulously threaded a very special R.M.Williams narrative into an exceptional motorcycle.”

As you would expect from Blitz, the technical specification is impressive and unique to this motorcycle. Powered by a parallel twin 650cc engine featuring a K&N air filter and re-jetted carburettors plus eighteen-inch trial scrambler tyres to both front and rear. A beautiful touch is the 1970’s vintage fuel tank with bespoke R.M.Williams strapping. All electrics have been fully rebuilt with wiring connecting to Blitz Motorcycles mini-switches mounted on vintage US Triumph handlebars and the braking system has new pads, a new master cylinder and a bespoke braking hose as well as a list of further modifications.

You can view the R.M.Williams x Blitz motorcycle at an installation on the Lower Ground Floor at Harrods from 29th September and throughout October. On the Fifth Floor, there will be a bespoke R.M.Williams trunk, showcasing the extensive options offered as part of the brand’s bespoke footwear service. 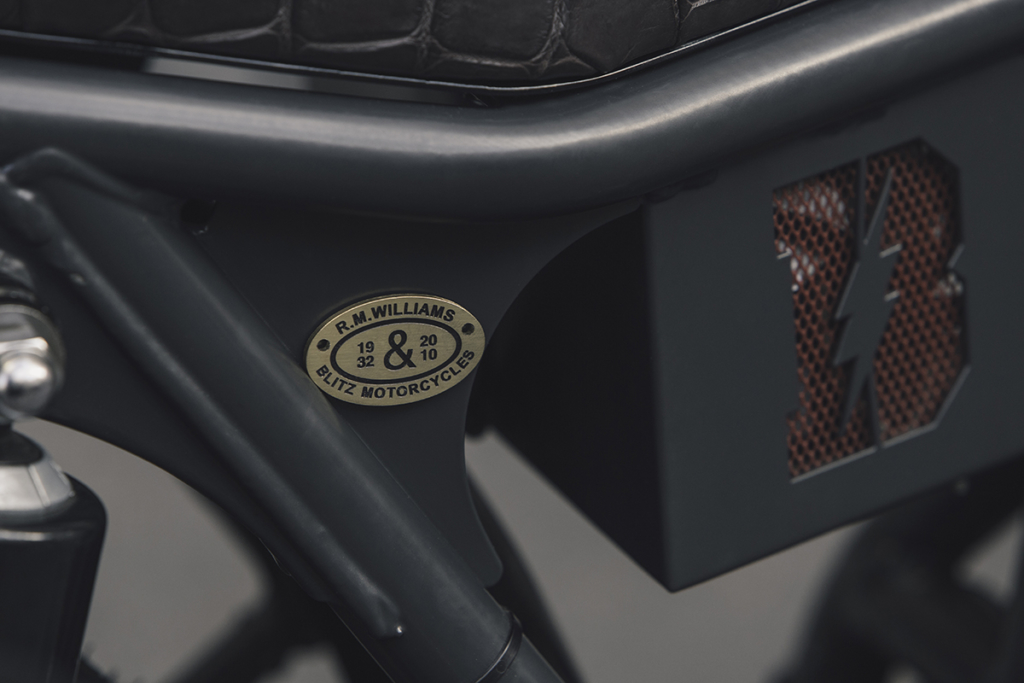 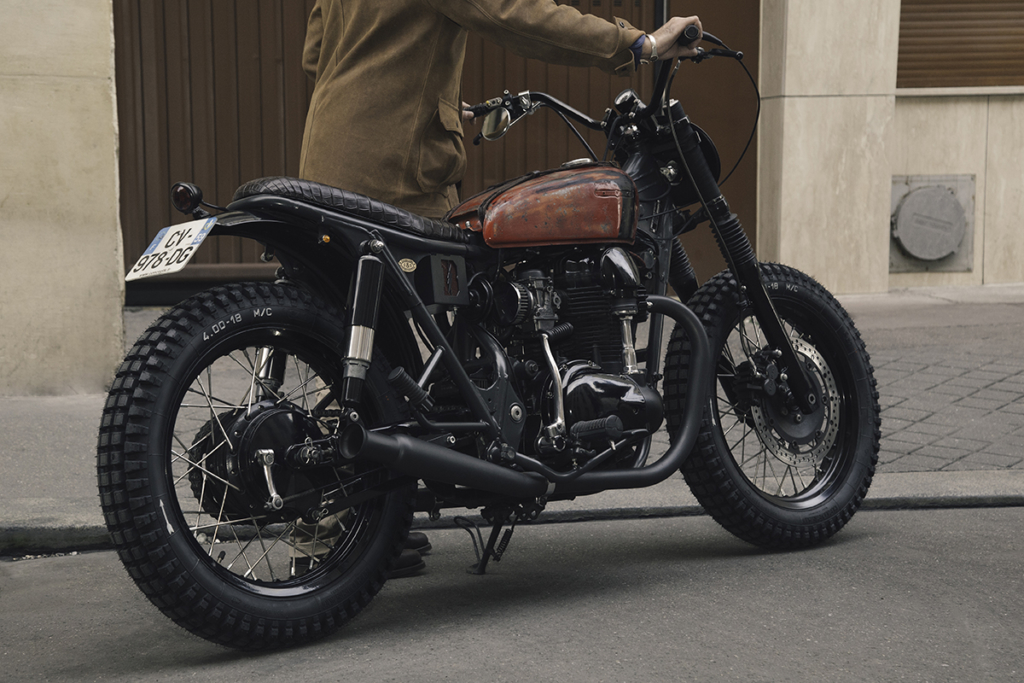 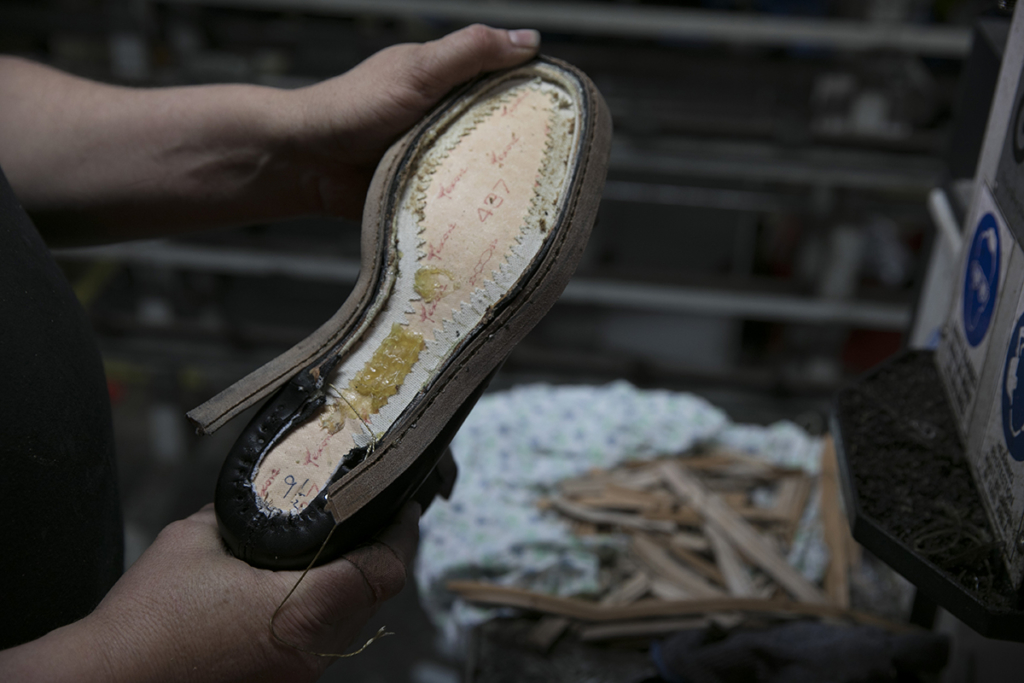 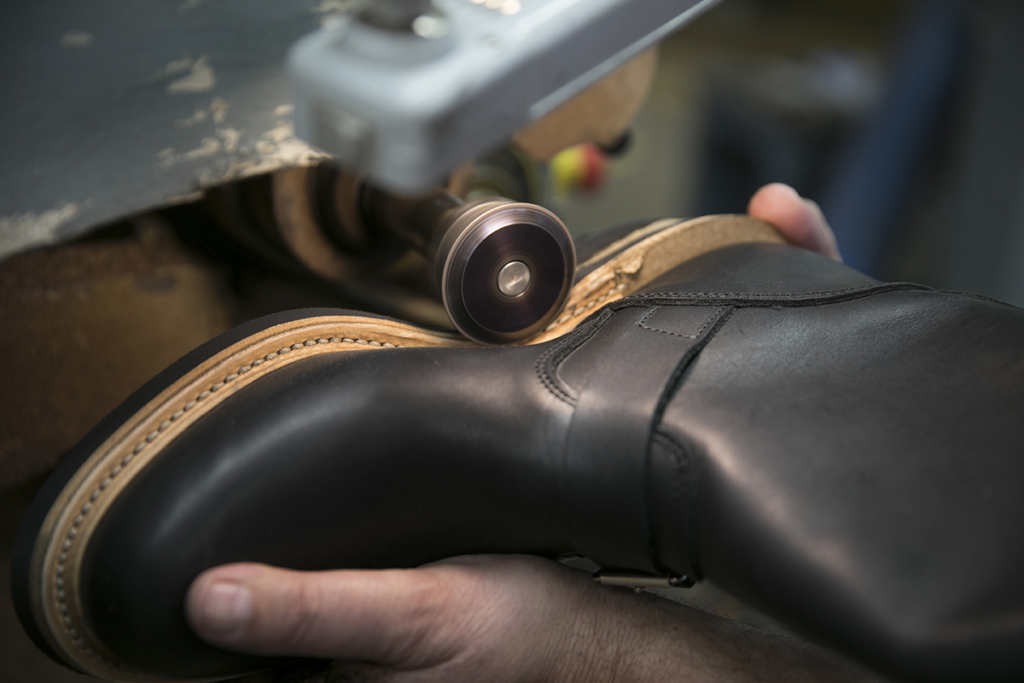 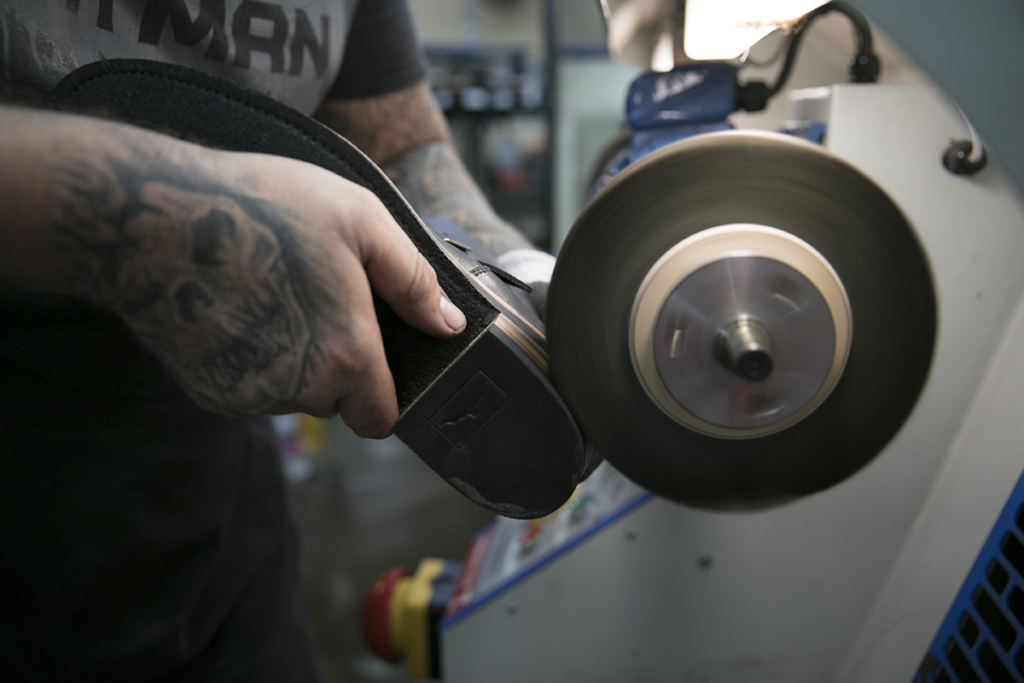